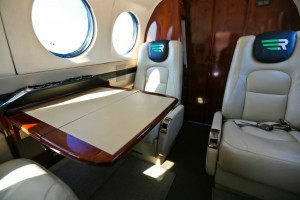 The Collaborative Economy is the name given to the sharing of products and services over more traditional ownership models. Jeremiah Owyang is the leading voice on this change, covering companies like Uber, AirBnB, and Sidecar.

With valuations in the tens of billions, these firms can't be discounted. But it's not all home-sharing and taxi substitutes. What if you had a plane as your taxi? That's the conception behind Rise, a Private Flight Sharing company that just got approval to come to Great Britain  in 2016.

Rise launched in Texas as monthly subscription to allow members to travel freely between Austin, Houston, and Dallas. From their blog:

This could be interesting for expatriates, but it's the commuters and salespeople who can get really excited. Imagine being able to commute one hour from city to city, instead of traveling four days out of the week like so many remote workers.

Unlimited flights for a monthly subscription. It's fundamentally no different than the way you purchase a gym membership, but now applied to traveling several hundred miles.

As the subscription model is applied to more industries, expect to see more convenience as the cost of ownership outweighs the value to the individual or corporation. Rise is slated to start flying in 2016. I can hardly wait.